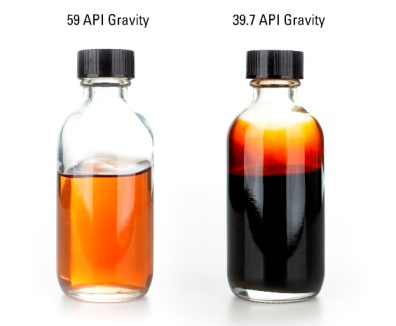 Crude Oil is a liquid found within the earth compromised of hydrocarbons, organic compounds and small amounts of sediments and metal.  Within the industry, people talk about ‘Crude Oil’ as if it is just one standard liquid form. However, this is far from the truth.

Crude Oil extracted from the ground in its natural unrefined state varies considerably in its density and consistency. It varies from a very thin and volatile liquid to an extremely thick, semi-solid heavy weight oil.

Furthermore, the colour of Crude Oil extracted from the ground can range substantially, from a light golden yellow to a deep dark black.

As we have now established, ‘Crude Oil’ is a term used to describe many different types of raw oil extracted from the ground.

Within the industry, we categorize into four main categories based on three factors: their viscosity, volatility, and toxicity.

Viscosity refers to the oils ability to flow.  Higher viscosity oils do not flow as easily and therefore take more energy and effort to pump from the ground.

Volatility describes how quickly and easily the oil evaporates into the air.  Higher volatility oils need additional processes to control their environments during extraction to ensure that as little oil as possible is lost.

Toxicity refers to how poisonous and harmful the oil is to the environment, wildlife, and humans during the extraction and refinement process.  When oil spills do occasionally occur, each oil poses different challenges and priorities during the cleanup.

With that said, the four main types of Crude Oil are: